Ray St Jonn · December 16, 2017
0 2 2.4k 0
Some of the links on this page are affiliate links. This means that Swedish Freak will earn a commission if you purchase anything from these links. Thank you for your support!

If the name Dag Wirén doesn’t conjure up any melodies for you, do not feel bad. Outside of Sweden, not many people have treated themselves to (or been aware of) the musical creations of Dag Wirén. Collectors of modern and eclectic classical music most likely know his famed Serenade for Strings, Op. 11, although he wrote many other works beyond this popular piece. 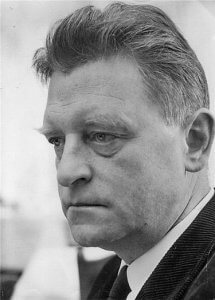 Born in 1905 in Striberg in the province of Västmanland, Wirén was raised in a family that enjoyed and appreciated music, although none were accomplished musicians.

As a child, he took piano lessons and played both bass drum and celesta (a keyboard instrument that produces a bell-like timbre) in the town orchestra.

His musical talent was strong enough to earn him entry into the Stockholm conservatory and ultimately earned him a state stipend, which he used to travel to Paris and lived for 3 years beginning in 1931.

During his stay, he soaked up the exciting new music being produced by Igor Stravinsky, Sergei Prokofiev, Francis Poulenc, Darius Milhaud, and other avant-garde composers in the early 1930s.

Wirén also met his future wife in Paris, the Irish cellist Noel Franks. In 1934, Wirén returned to Sweden to lead a productive and melodic existence at his home in Danderyd, just north of Stockholm. While most of his compositions were orchestral and chamber works, Wirén also wrote music for both stage and film.

In all, Wirén wrote over a dozen orchestral works (including 5 symphonies), 4 concertos, more than a dozen chamber pieces (including 5 string quartets), along with solo works for piano or guitar, choral works, songs, theater music, and film scores.

Where to Find Wirén’s Music 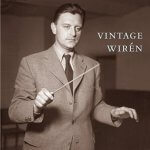 I uncovered a wonderful album that you can get on Amazon entitled “Vintage Wiren” (yes, the US Amazon site is crass enough to replace the “é” with an unaccented “e” in his last name!).

This album is precisely what the title says: vintage performances of eight works, all performed and recorded in the 1930’s, 40’s, and 50’s, so you should expect the quality of the recordings to deliver less than today’s demanding standards, considering these early recording dates. The eight pieces are a mixture of chamber and orchestral works, so it also provides a good representation of his compositional abilities in both fields.

Two of the chamber pieces are piano solos (one with the beguiling title of Ironic Small Pieces), another is for piano and violin, and the final chamber work is for piano and cello. On the orchestral side, you are treated to his ever-popular string serenade, as well as a concert overture, cello concerto, and sinfonietta.

All in all, a great introduction to a lyrical Swedish composer who, ironically, only gained international recognition and appreciation a decade or so after his death in 1985.

(Concerning the posthumous interest in and discovery of Dag Wirén: he was not a secret that Swedes deliberately kept from the world, but simply mirrors quite well the respectable and sensible attitude that Sweden has of not feeling compelled to trot out and put on display every great person who happens to come from their country. It is up to others to discover the many and varied jewels that Sweden has produced and nurtured. And I am here to help by sharing my treasured Swedish discoveries!)

If you prefer to hear more recent recordings of Wirén’s works, I would recommend the following two titles from Amazon (again providing you the Americanized (or is that Amazonized?) misspelling of Wirén’s last name, as found on their website):

I was further delighted to come across a brief YouTube video about Dag Wirén that was narrated by his daughter, Annika, and Per-Henning Olsson, a musicologist. In Swedish with English subtitles, it offers an excellent overview of his life and work, sprinkled with samples of various pieces.

For those of you who read Swedish (or love a challenge!), you can visit the Swedish-language website entitled Dag Wirén Stiftelsen and gain even more information about his life and work.

In addition to the above biographical sketch, the music/video recommendations, and links, let’s close with an embedded video of a performance of Dag Wirén’s best-known work, the Serenade for Strings, as performed by the Cali Camerata.

Robyn is coming to Skellefteå, Sweden