SwedishFreak · December 10, 2017
2 2 8.7k 0
Some of the links on this page are affiliate links. This means that Swedish Freak will earn a commission if you purchase anything from these links. Thank you for your support!

One of my favorite ways to learn Swedish is to watch Swedish films. Because I don’t live in the country, I have to actively search for what to watch (not many Swedish films are advertised here).

So, I went ahead and asked on Swedish Freak’s Facebook page, what is your favorite Swedish film?

And I got some amazing answers! Here are the top Swedish films, recommended by those who love Sweden.

Ingmar Bergman is one of the most famous directors to come out of Sweden.  The Seventh Seal is set in Europe during the black death.  A knight returns home from the crusades to find his country dealing with the plague. He challenges Death to a game of chess, with his life in the balance.

Where to Watch Det Sjunde Inseglet

Based in medieval Sweden, The Virgin Spring is a tale of what happens to two girls who set out to deliver candles to churches. I don’t want to give too much away (you can read the plot here), but it sounds like a very intense film that touches upon themes such as religion, vengeance, and sexuality.

It is based on a 13th-century ballad (which is a song or poem that tells a story) and in 1961 won an Academy Award for Best Foreign Language film.

Perhaps because this is a classic, you can watch the whole film on YouTube.  Or rent it on Amazon prime.

This Swedish comedy follows Robin, who leaves his town after the factory shuts down and tries his luck in Stockholm as a wedding photographer. At his first gig, at an upper-class wedding, he ends up falling in love with the bride’s sister. And does everything he can to prove he can fit into the upper-class lifestyle.

This film won Best Screenplay and Best Supporting Actor at the Guldbagge (the annual awards given out for Swedish films. It is like the Swedish Oscars) and was nominated for Best Actor.  It also has an official website that is updated periodically with new blog posts.

You can watch the whole movie on YouTube (surprisingly. Won’t be surprised if that goes away eventually).  You can also watch it here.

Staring the late Michael Nyqvist, this drama follows a daughter who goes to her estranged father for help.

Shortly after, he has a stroke and loses his memory.

Watch the full trailer below:

Not as lucky with this one on where to watch. Can’t find where you can rent or view it easily, but you can purchase the DVD on Amazon.

A perfect time to watch this holiday season, En Underbar Jävla Jul is a comedy about a gay couple, Simon and Oscar.  They are excited to be expecting a child with their friend Cissi and choose Christmas Eve to announce it to their families.

This looks like a great film, and it is only 2 years old. However, perhaps because it is so new, I can’t seem to find it online.  It is available on streaming websites for Scandinavia, but not available for people outside of Scandinavia. Not even on Amazon. Boo!

I’ll keep checking back periodically. If you find a place where you can rent this or stream online, let us know!

If you live in the EU, you can purchase the DVD online here.

Annika is a reporter who attends the Nobel Banquet. She happens to witness the murder of a scientist, and the attempt on the life of a Nobel laureate. A group of German’s take credit, but not everything is what it seems in this thriller.

Check out the trailer below.

Where to Watch Nobels Testamente

Unfortunately, this is another hard to find one. I couldn’t even find the DVD with English subtitles.  If you happen to have any resources, please leave in the comments!

Now, this is one I have had a chance to see! And it is a good one. This dark comedy follows around Ove, a strict, grumpy old man who has had enough of this life, but never has a convenient enough time to end it all. A new neighbor has moved in, and an unlikely friendship forms.

This film received 6 Guldbagge award nominations, won two and was nominated for the Best Foreign Film at the Academy Awards in 2016.

It is such a great film, Hollywood is remaking it with Tom Hanks.

If you have Amazon Prime, you can watch A Man Called Ove with your prime membership.  You can also purchase the DVD from Amazon US and Amazon UK sites.

This comedy/drama takes place in Norrland, the northernest most part of Sweden. A conduct returns home and soon after is asked to help the church choir.

It was nominated for Best Foreign Language Film of the Year in the US, as well as a host of other nominations.

You can check out the full trailer here:

Where to Watch Så Som i Himmelen

You can purchase the DVD on Amazon here in Europe, or in the US (though it seems only available in Region 2 format, which won’t play on most DVD players in the US and their territories).

This dark comedy musical follows a father who rules his family and factory with an iron fist. The factory turns eggs into tools for scratching certain unreachable human itches.  When the son rebels, the father is not all that happy.

The film won “Best Director” at the Swedish Guldbagge awards.

Where to Watch Ägget är Löst

I’m having difficulty finding this one. And here I was hoping it was old enough to be available somewhere for free! Boo!

If you have any idea where to either rent, stream, or purchase Egg! Egg!, please leave a comment!

This comedy takes place in the 70s in a community of different types of folks. Elisabeth looks to the community when she has had enough of her alcoholic and abusive husband, and Elisabeth ends up liking this community of vegans and communists more then she thought she would.

This film has won 14 awards worldwide and has over 14 more nominations.

Check out a trailer below:

Where to Watch Tillsammans

Yippy! This one is available to stream on Amazon. Or you can purchase the DVD.

The Millenium Trilogy, which is 3 films (The Girl With the Dragon Tattoo, The Girl Who Played with Fire, and the Girl who Kicked the Hornet’s Nest) is based on 3 Swedish best selling books. It was later remade by Hollywood starring Daniel Craig.  But as you can suspect, nothing will be as good as the original.

The 3 movies follow a journalist, who is hired to investigate an unsolved missing person’s case that is 40 years old. He is helped by a female hacker. The case becomes more dangerous then they could have imagined.

Read my full review of the Millenium Trilogy here.

Where to Watch the Millenium Trilogy

You can stream The Girl with the Dragon Tattoo on Amazon or purchase the DVD set on Amazon.

Another classic from the famous Swedish directory, Ingman Bergman.  This time, a drama about a recently divorced man who begins a love affair with a devastated widow.

It won 2 awards and was nominated for 6 others.

Where to Watch En Passion

As with the other Ingman Bergman films, you can watch En Passion on YouTube, with subtitles, for free.

This Swedish drama/comedy was nominated for two Oscars and won the Best Foreign Language Film at the Golden Globes.

It is about a boy, Ingemar, who doesn’t always get along with his brother.  When he and his brother become too much for their sick mother. They are separated and sent to relatives’ homes in order to give their mother some rest.

You can rent or buy My Life as a Dog on Amazon or you can purchase it from iTunes.

As you can see, there are some great movie recommendations from others who love Sweden! Hopefully there are some ones that you haven’t seen in this bunch that you can add to your “to watch” list.

Remember, anytime you are watching a film in Swedish, you are technically learning a bit of Swedish, too.  Any of these movies are not only going to help you learn the language, but will give you a real taste of Sweden.

What movie are you going to watch first? 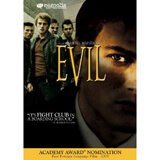 Win a copy of the “Evil” on DVD