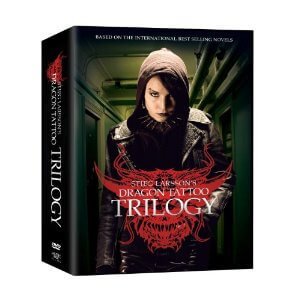 The Girl with the Dragon Tattoo – Män som hatar kvinnor

The Girl Who Kicked the Hornet’s Nest – Luftslottet som sprängdes

Directed by Niels Oplev Arden (The Girl with the Dragon Tattoo) and Daniel Alfreson (The Girl Who Played with Fire, The Girl Who Kicked the Hornet’s Nest)

These three movies (which were first books) make up of the millennium series by Stieg Larsson. They became best sellers and a remake of the movie is coming out soon. But why see the remake when the original is fabulous? If you like the books, then you will like the movie.

The first movie/book, The Girl with the Dragon Tattoo, is a story in itself and can be seen separately from the other two movies. It focuses more on Mikael Blomkvist, a writer who is hired by a rich old guy to find his niece that has been missing for 40 years. The old guy suspects that he has been murdered by one of his crazy family members.

The other two films are, on the other hand, one story which focuses more on Elisabeth Salander, her early life, and politics in Sweden. The Girl Who Played with Fire does leave a bit hanging, so I recommend to get both of the last movies and watch them closely together.

The production of these films is great, as with all of the Swedish films I’ve seen. Surprising is that this film was also originally released as a TV mini-series, similar to Arn The Knight Templar. I need to pay more attention to the TV series they play in Sweden!

The guy who plays Mikael Blomkvist (Michael Nyqvist) is not the most favorite of actors on my part. I don’t find him very attractive, so it is no surprise that I find it hard to believe that many women would want to sleep with him. But to each their own, right?

The movies are definitely thrills, show an interesting side to Swedish culture, and are a great way to practice your Swedish. You can purchase the whole set on Amazon for less than $40.

And if you are reading Swedish Freak, please oh please, see the original before seeing the Hollywood remake!