SwedishFreak · May 2, 2011
0 0 1.2k 0
Some of the links on this page are affiliate links. This means that Swedish Freak will earn a commission if you purchase anything from these links. Thank you for your support!

Over the weekend all of Sweden celebrated spring with Walpurgis Night (or Valborgs in Swedish). This holiday is still common in lots of parts of Europe, including the Czech Republic, so it was nothing new to me. However, because I come from the dried lands of California, where generally any fire is strictly prohibited, I love this spring holiday where fires can be seen from far far away! 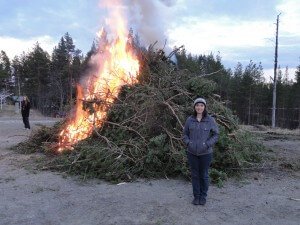 Usually korv* are grilled or roasted in smaller fires because the majbrasa is just too big to even attempt to approach. But this year I got to try a special treat: pinnbröd! We decided to grill before going to the folkets hus* to see the majbrasa*. 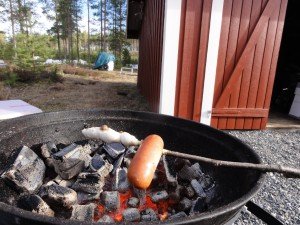 The pinnbröd was very easy to make – flour, salt, baking powder, and water. The harder part was getting the right consistency so it wasn’t too sticky or too dry. My first batch was a little too sticky, but it was still manageable. It was hilarious to see my Swede enjoy his pinnbröd. He was like a little kid all over again! He told me growing up they would have contests who could do the longest pinnbröd, and that this activity would keep them occupied for hours. 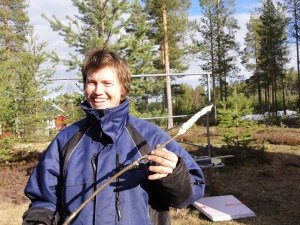 And I could see why! Making and roasting pinnbröd is very addicting. I wasn’t so smooth on my first attempts to put the dough on the stick, but it didn’t turn out so bad in the end and was delicious!

Later that evening we headed to the folkets hus to see the majbrasa. While it did take a while to catch due to most of the branches being green, it was a fabulous site. The folkets hus is a cute little building and lots of people from the local village where around. There was a fun little quiz contest for both adults and children (and I said I should do the child’s one simply because I am only 1 year old in Swedish years.) The adult questions where simply impossible for me, and the child’s quiz I only knew 3 out of 9 answers! Goes to show how much I’m missing in Swedish culture. 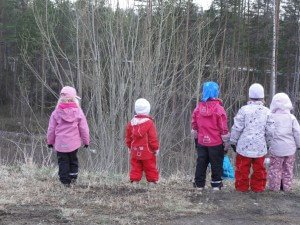 The people were very friendly. A nice old man gave me some sausage to roast, making the evening complete! 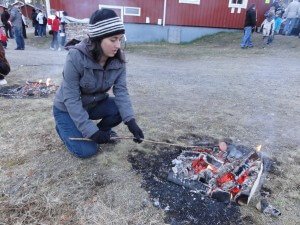 It was a lot of fun, but much different from the Czech parties I was use to. Plus it was much colder and lighter for a much longer time. Oh yes, and the rockets. Apparently Valborgs is an excuse to shoot off rockets! Hey, why not, after a long winter it is time to celebrate spring!

korv – sausage
folkets hus – direct translation “the common people’s house”, a building for a community that can be rented and usually have neighborhood activities taking place
majbrasa – May bonfire 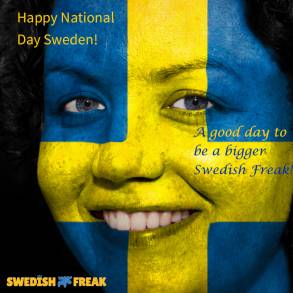 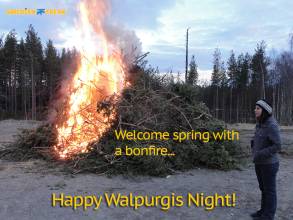 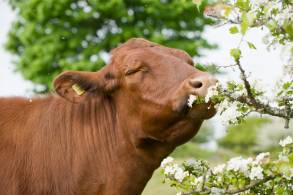