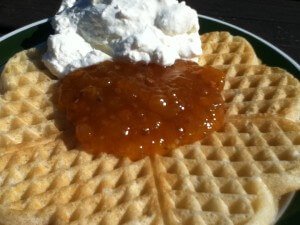 Swedish Waffle Day! Yes, apparently there is a special day dedicated to waffles in Sweden. This is March 25th. And what do Swedes do on Swedish waffle day? Why they make and eat waffles!

Traditionally, waffles will be served in (almost) every Swedish home on March 25, which is called “Våffeldagen” (Waffle Day). This name is actually a misunderstanding – in ecclesiastical tradition, March 25 is Annunciation Day, i.e. Our Lady Day. The Swedish name, “Vårfrudagen” can – poorly articulated – be mistaken for “Våffeldagen”.

I bet you whoever was trying to pronounce “Vårfrudagen” had just taken a huge bite of a waffle, and it came out muffled, sounding like “Våffeldagen”!  No complaints here! Every country should have a day dedicated to delicious waffles. (In the United States waffle day is August 24th, the day the waffle iron was patented in the US).

But of course, waffles are served any day of the year in Sweden, either as a fika or a nice little desert (Swedish waffles are served with jam and whipped cream, unlike in America where we tend to pour maple syrup over everything).

Now some of you may be asking, what makes a waffle a Swedish one? Besides maybe some slight differences in the recipe, it is all about the shape!  Swedish waffles look like 4 hearts stuck together, while other waffles may be square.  Apparently, this heart shaped waffle iron is a bit new, coming along in the 19th century.  The waffle iron itself started to become used in Sweden (over a fire) in the 17th century.

We have two great recipes for Swedish waffles, brought to you by our own Thomas, for you to try. Now there is nothing stopping you to celebrate your own Swedish Waffle Day!