When it comes to lakes in Sweden, most people instinctively head for the well-known Vänern, which is the largest lake in Sweden and the third largest in Europe. However, those that are looking for real beauty should consider heading to Sweden’s second largest lake instead, which is the majestic Vättern – a lake connected to the massive waterways of southern Sweden. With beautiful sights, amazing wildlife and unrivalled tranquility, Vättern should be on every single tourist’s itinerary! 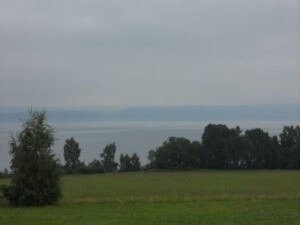 Before we continue on this exploration of Vättern, we should just go over one of the legends that surrounds this lake – both as a point of interest and also as a warning to everyone to be on the lookout! This is the myth that – just like the famous Loch Ness – Vättern has a lake monster lurking in its waters – something that many people still believe in today! While this is almost certainly untrue, the next time you feel a sharp tug on the fishing line, be mindful of this little story…

The story of fishing for the monster brings us neatly onto the most popular activity in the region, which is – as you might already have guessed – fishing! The lake has an abundant amount of different species living under the surface, with the most sought after of these being the Vättern char, which is not only tasty but also is a great catch for any fisherman, no matter how experienced. There are also other fish to catch as well, such as the Atlantic Salmon, and all of these are completely free to try to land – well, unless you plan on using nets! Due to the fact that Vättern is not as busy as Vänern, it means that the fish are far more likely to bite as well.

The area surrounding Vättern is also home to a number of different historical sites, making this area a great choice for those looking to explore Sweden’s long and interesting past. Perhaps the most popular of these sites is the castle of Läckö Slott, which was once owned by one of Sweden’s most important historical figures – General Magnus Gabriel de la Gardie. There are also a number of different churches dating from hundreds of years ago, as well as other castles in the area too.

Perhaps the most well-known event that takes place around the shores of Vättern is the annual Vätternrundan – a cycling race that has been taking place in 1966. From the first race – which featured 334 different competitors – it has now evolved into an event attracting over 20,000 participants, with a large number coming from outside of Sweden. Anyone is able to enter, so it is the perfect opportunity for keen cyclists to test themselves against a fun, yet challenging, track. It is held in June every year and places are limited, so book early!

Around the shores of Vättern are a number of different towns and villages, all of which have grown up thanks to the influence of this massive expanse of water. These include Vadstena, Hjo, Askerskund and Karlsborg – all of which are great places to stay, with a friendly population and a really vibrant feel. They all have some great eateries and bars, where you can sample local Swedish produce or sip a few glasses of your favorite beverage while looking out over the stunning sites. As the Sun goes down the lake takes on a completely new perspective, with beautiful vistas and breathtaking scenery that will stay imprinted in your mind forever – or even on your camera!