If you’re an expat in Sweden, there’s a good chance you see and use it every day: the krona, Sweden’s currency. But besides earning it, spending it in shops and (hopefully) having a bank account full of it, what do you know about the krona? Well, that’s the topic I want to broach in this post.

History of the Swedish krona 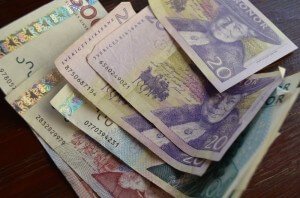 The krona (meaning “crown” in English) came into being in 1873, when it replaced the then-Swedish currency the riksdaler. Unlike the riksdaler (which translates as “daler of the realm” in English, mirrored in the name of Sweden’s central bank, the riksbank, or “bank of the realm”), the krona wasn’t intended as a currency just for Sweden, but as part of a Scandinavian Monetary Union, with Denmark and Norway. This only lasted up the end of World War I, but explains why, even though today these three countries have individual currencies, they all share the name “crown” (in Denmark and Norway, “crown” becomes “krone”, not “krona).

One of the most remarkable features of the krona is that it still exists at all. By this I mean, Sweden didn’t join the majority of its fellow European Union members and adopt the euro, thereby rendering their national currencies defunct. This is in spite of the fact that Sweden is technically obligated to join the euro, as one of the conditions of its ascension to the EU in 1995. (Sweden avoids this by a loophole, by which countries that join the euro must join the Exchange Rate II (ER-II) mechanism for two years beforehand. However, membership of ER-II is voluntary, giving Sweden a way out). More importantly, repeated polls have shown that the majority of Swedes prefer to retain the krona.

Another interesting historical feature of the krona is that it’s one of the only global currencies to not be sub-divided into smaller units. This is to say, if you have a US dollar, you can divide that into 100 cents, right? And if you have a UK pound, that’s made up of 100 pence, you know? Well, this isn’t true in Sweden. A krona is a krona is a krona. This is because, in September 2010, the Swedish government decided to discontinue its series of currency sub-units, known as öre, because the cost of producing them was more than their value. Hence, while öre can still feature in electronic bills, all cash payments in Sweden must be rounded up to the nearest krona.

Features of the Swedish krona

Like most modern currencies the krona is freely floated. This doesn’t mean it’s a balloon that someone let go of, but that Sweden doesn’t (directly) intervene to control its value. Instead, the value of the krona is determined by participants on the foreign exchange market. They decide how much to buy and sell the krona for, based on the strength of Sweden’s economy compared to other countries.

The aforementioned Riksbank, Sweden’s central bank, is responsible for issuing krona. In addition, as with most central banks, it has an almost definitive influence over the krona’s value, thanks to its ability to set interest rates. Simply put, higher interest rates make Swedish bonds and equities more profitable to investors, giving them a higher incentive to buy the krona. However, changing the interest rate has a whole heap of implications for Sweden’s wider economy, like the cost of a mortgage, meaning the Riksbank can’t just change the interest rate to influence the krona when it feels like it.

The value of the Swedish krona

As you probably know if you’ve ever taken a trip from Sweden to the Eurozone, or vice versa, the krona is a good deal beefier than it used to be. From its lowest value in 15 years, 10.94 kr to the euro (03/01/2009, during the financial crisis), the krona has taken a one-way escalator up reaching as high at 8.38 kr to the euro last August.

Why’s this? Well, it reflects the fact that Sweden’s got two things going for it. One is the fact that it doesn’t use the euro, a currency that, as recently as two months ago, looked ready to pop its clogs, causing who knows what economic havoc to its members. The second is the fact that Sweden is a country in great economic shape, with public debt of about 35.0% (compared to 90.0% in the UK or Spain) and good growth prospects (Sweden is estimated to have expanded +1.2% in 2012, while the Eurozone shrank -0.1%). All that leaves investors saying “Swedish krona? I’ll have some of that!”, driving up its value.

So, the krona is an interesting currency, and it’s also a strong currency. Is there anything you’d like to about it that I’ve missed? Then let me know in the comments!

Peter is an economist at foreign exchange broker Pure FX. He’s worked in foreign exchange since 2010, and is a close follower of global politics and economics. If you have any questions for him about exchanging Swedish krona, he’d be delighted to help answer them.