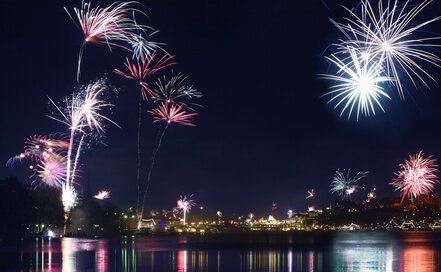 New Year’s Eve is on December 31st and is celebrated in Sweden in a very similar way as in the United States. Most likely you stay home with close friends, stay up until midnight and have some champagne while you watch fireworks, or you go out with friends downtown, wait until midnight, and then drink campaign and watch fireworks.

Fireworks are common in the larger towns for New Year’s Eve and usually start at midnight. When midnight does strike, you will here “Gott Nytt År’ from the Swedes along with a clink of glasses.

Stockholm’s old town and the center of other larger cities will have celebrations out in the street, no matter how cold it may be.

More Days Off of Work

New Year’s Day, which is January 1st, is officially a red day, meaning no work. New Year’s Eve is a de facto holiday, meaning people usually get the day off.

Which is a good thing, because on New Year’s Day you will definitely want the day off in order to nurse the hangover you had from being Swedish drunk the night before. So this day will usually consist of just hanging around trying to get ready to face work the next day.

Yes, Sweden also has the failed New Year’s Resolution. I say failed because it is that type of resolution you only keep for 3 weeks, maybe 2 months if you are lucky. So they are usually not taken that seriously. But it is still always good to have goals for the new year, so why not?