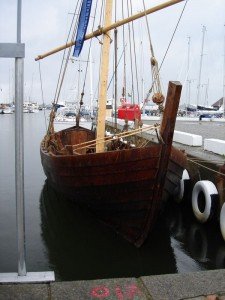 Not far down E20 from Göteborg is one of my favorite places, the town of Varberg. When I was a girl we would pile five or six kids in the back seat of a tiny Opel and hit the open road. You couldn’t get away with that today, but back then it was nothing!

In Varberg’s harbor you might see a big Stena Line ferry ship about to sail for Denmark. Or, if you are lucky, you might find a small but sturdy wooden boat, a descendent of a Viking-era knarr, or freighter. It is called Galtabäcksskeppet, and it is a reconstruction of an early medieval ship that was recovered from the silt of a small harbor just south of town. 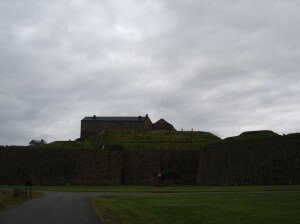 The main attraction in Varberg is the massive medieval fortress. The oldest part of it was built in 1280, which makes it well over 700 years old! It sits right on the beach, with sprawling grounds alongside. My grown-up eyes groove on its sharp lines and colossal stonework, but when I was a girl I was most impressed by its dark passageway that spirals slowly down, down, down to the dungeon, pierced by thin shafts of light sifting though high slits in the wall, its cold air creepy on my gooseflesh.

The Danes built the fortress to hold off those dreaded Swedes, and though it kept watch over land and sea through centuries of warfare between the two nations, it never became a stage for actual military conflict. Sweden has controlled it since the 1600s, and used it as a prison until 1931. These days you can enjoy its museums and, naturally, a café where you can fika to your heart’s delight. There’s even a vandrarhem – a hostel – located in the fort, where you can spend a night or two pretending to be a prisoner locked away in the dank dungeon! 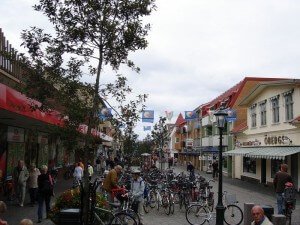 Varberg hosts some special events during the year, too. One of them is Medeltidsdagar (Medieval Days), a medieval fair of mythical proportions, overflowing with bakers, spinners, troubadours, archers and other medieval types.

I’ve never experienced that festival but a few summers ago I did inadvertently stumble upon something almost as good or possibly better, depending upon your interests: Wheels & Wings! Imagine my surprise when the town center, ordinarily dominated by bicycles, was suddenly crawling with classic cars, mostly American, all chrome and custom paint, cruising the cobblestone and partying like it was 1959!

And if you need another reminder of time’s passing while in the medieval town of Varberg, consider this: The Wheels & Wings 2012 entry on the Cruising Sweden website states, “…the police will be tough on those who don’t sit down in their cars, it is a safety detail.” Just the type of safety detail that was in short supply back in the days when we piled three families worth of kids into a tiny Opel sedan! But whatever your vehicle of choice, if you’re in the neighborhood, I advise you to spend a day or two in Varberg!