The vast and seemingly unending forests and lakes provide habitat to a variety of species. These hardy species are equipped with the capacity to survive the intensity of the seasons in Sweden, making them unique animals indeed. The following species have been highlighted due to their abundance, visibility, and/or uniqueness to Sweden. 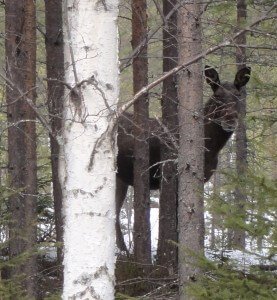 The moose, commonly considered the King of the Swedish forest, can be found all over Sweden, except for on Gotland and in the very north. The moose is the largest deer animal in the world, measuring 2 meters in height and weighing up to 400-500 kilograms. Sweden has a very large moose population, around 250,000, with about 100,000 moose shot during hunting every year. The Halle-Hunneberg area is the most recognized for providing tours, presenting opportunities to see this iconic mammal, of which Swedes and visitors alike find it fairly easy to catch a glimpse of.

The wolf is a protected species which is slowly beginning to renumber. With an estimated population of 100, this is an animal that one may not expect to catch a glimpse of. Groups of wolves are known to head to certain areas such as Värmlamd along the Norwegian border, and Bergslagen, for example, and it is at these locations that there is a possibility of sighting one. 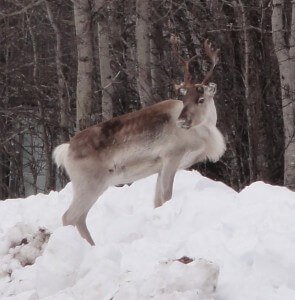 Reindeer possess a number of features which suggest their adaptation to a cold climate. Short legs, ears and tail, a hairy muzzle to reduce heat loss and very broad, flat hooves to assist them in walking on snow in winter and on marshy ground in summer, are evident in their appearance. Herders use their lush coats to fabricate winter clothing and moccasins; reindeer are also used for their milk, and their antlers for carving. The Sami are the sole owners of the reindeer, meaning they are the only ones that can herd and hunt the reindeer. Check out Missfoster’s first close encounter with the reindeer! 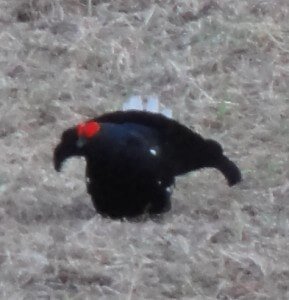 Birds are a distinctly beautiful creature to encounter throughout the forested lands of Sweden. Pictured to the left is the black grouse, common in Norrland’s forests. They are hunted in the fall for their unique taste and feathers. In the spring in Norrland the black grouse can be seen in the fields doing a mating call and dance.

The Scandinavian Brown Bear Research Project estimated the Swedish brown bear population at somewhere between 1,635 and 2,840 in 2004. The distribution of brown bears appears to be increasing, and correspondingly, the probability of spotting one. However, it is well documented that the chances of a sighting are still low. Since the brown bear is a protected species, hunting is out of the question. Brown bears hibernate during the winter after attaining sufficient fat reserves.

The once abundant species’ population is apparently, according to recent studies, at risk. Once plentiful throughout the countryside, this creature is now tending towards an urban habitat. 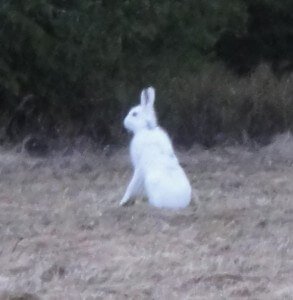 There are two types of hare in Sweden, Forest hare (also known as Swedish Hare) and Field Hare, which are also known as German Hare in Swedish. Forest Hare are abundant in the Swedish forests in Norrland. Field Hare is found only in southern Sweden. During the summer and fall before the snow fall hare are a brown color to better blend in. In the winter the hare turn white and are one of the more active forest creatures. Pictured to the left is a hare in the spring, before their fur turns back to the brown color. Hare are hunted in the autumn for their fur and meat. Surprisingly, at least to me, is the fact that hare turn white not because of the snow, but because of the amount of sunlight. So if there is short winter you may see white hare before snow actually has fallen.

The difference between hare and rabbit? Hare have the longer rear legs, they have a black spot on the tip of their ear, and give birth to young that can see and have hair.

The probability of catching sight of a lynx is little to none, though they can be found throughout many regions of Sweden, particularly in the northern and central regions. These majestic creatives are as shy as they are beautiful, and it is fortunate that the populations are beginning to increase. The lynx is Europe’s largest feline, and around 1,500 lynx may be known to live in Sweden (3).

Various species of worms inhabit the land of Sweden and its surrounding waters, among them are some recently discovered varieties. Fascinating as the new discoveries in worm species which can be traced to the Swedish coast, however, are the long-known type that emerge from the snowy drifts of Sweden during the winter.

Wolverines are heavily protected and have difficulty renumbering since they partly depend on other predators, primarily the wolf. Sadly, the wolverine is under threat of extinction in Sweden, with an estimated 100 individuals inhabiting the northern parts and mountain regions. Prey for the wolverine is difficult to find, and thus, they cause some damage to the tame reindeer herds owned by the Sami people.