On Christmas, which is celebrated on December 24th instead of the 25th as in the America, Swedes enjoy large meals and presents galore.

Typically after dinner the father will “step out for the newspaper” and a few minutes later “Santa Clause” will visit the house and hand out presents. It is a pity that each year the father has such terrible timing and misses Santa, though I am told if one is lucky they can find a “Santa for hire” so the whole family can enjoy Santa’s visit! If Santa is not showing up (i.e. there are no young children in the house, then gifts are simply exchanged after dinner. One can sometimes find rhymes on the gifts Swedes exchange with one another. The American tradition of stockings by the fireplace are not traditional in Sweden.

Christmas trees are usually put up some time in December. As with most places both fake and real trees are available. Those who choose to have the more authentic (and more messy) live tree will usually go to the forest and cut down the tree themselves.

Similar to America, in Sweden the Swedes celebrate with a decorated, lighted Christmas tree with presents underneath. Unlike the U.S.A. the lights on the Swedish Christmas tree typically look like candles. Candy Canes can be found in stores in Sweden during Christmas time and are put on the Christmas tree similar to the United States.

The first recorded example of the use of candy canes to decorate a Christmas tree in North America was in 1847, when a Swedish-German immigrant, August Imgard, hung candy canes from the branches of a Christmas tree. Consequently, some people attribute the red-and-white striped confection to Sweden, but it is not clear where in Europe precisely this tradition originated from.

Swedes also usually have a feast on Christmas Day, consisting of ham, different meats, rice porridge, and lots of fish. At Missfoster’s first Swedish Christmas dinner in 2010 everyone received one baked potato each to accompany the Christmas feast. To an American used to mashed potatoes and other delightfully fat potato side dishes, a plain baked potato may seem very- er, plain? 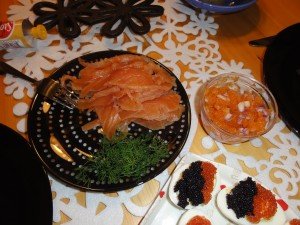 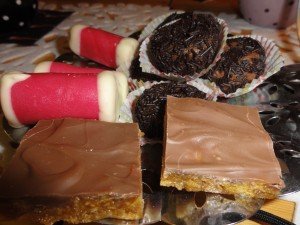 As with most cultures, Christmas cookies are something the whole family looks forward to and are a must for the Swedish Christmas fika. Swedish cookies differ from rolls to bars to baked goods. Ginger cookies are also very popular during Christmas time.

Chocolates are also very popular during Christmas time in Sweden – I can only assume that sales must go up. Employers usually give out chocolate to their employees as part of the annual Christmas gift. 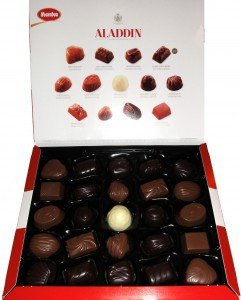 Aladdin chocolate, which is a box of assorted chocolate is the most common, easy to find, and popular during this time of year. While the original was a mix of dark and milk chocolate, they have expanded their brand to make Aladdin chocolate boxes that are only milk or only dark chocolate for those who have a preference.

Julmust is a special carbonated drink with a very unique taste that is only found in Sweden during the Christmas season. I am told that CocaCola looses a lot of sales during this time of year in Sweden due to everyone purchasing Julmust. Keeping up with the times, Julmust is also available in a diet version.

Lately, the mall has been packed with Christmas shoppers. Looks like it’s business as usual for this time of year. We went to downtown Skellefteå a few weeks before Christmas and it was a madhouse.