To make your own Swedish fika, check out our recipe section! 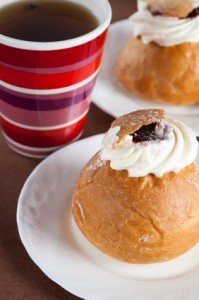 Fika is an almost sacred part of normal Swedish life, a virtual institution. But what is it, really, how and when is this “ritual” performed, and how did it start?

The procedure: how and when

First: Swedes are habitual coffee-lovers, all since the 18th century, when the ban on coffee and coffee-houses first was lifted, later reinstated, and finally lifted as late as 1822. The term fika refers to a break for a cup of coffee – i.e. a fika-paus. Coffee is an important part of the procedure, but fika is nowadays used about any break for social intercourse with cinnamon rolls, cookies, sweet pastries, ice cream, coffee, tea or… whatever, even a fruit salad.

Second: Swedes are also very fond of chit-chat, which is good reason to sit down with a cup of coffee and some pastry or cookies. A coffee break is a natural and pleasant way to have a friendly chat with your friends or neighbors, or your colleagues at work. And since you’re allowed to have 5 minutes break for every hour of work, you can easily have one fikapaus before lunch and another after. All personnel in the workplace is expected to participate (if possible). Not showing up would be bad manners or unfriendly.

If you’re at work: expect fika on customary hours.

If you’re not at work: expect fika whenever you meet a friend. 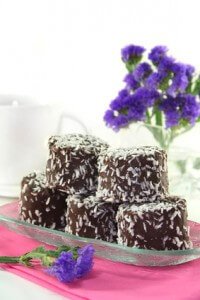 Third: Swedes love coffee that is strong, black and fresh brewed. It shouldn’t have any added artificial flavor (such as vanilla, coconut, hazelnut or raspberry), that’s an abomination to a coffee lover. But a dash of milk or cream, or a small amount of sugar is OK, that doesn’t disguise the coffee flavor.

Fourth: Swedes have a sweet tooth. And a sweet cookie or pastry is just great with coffee, isn’t it? People from other countries visiting Sweden often underestimate the social importance of fika, since they focus on, and become amazed by, the wide offering of soft cakes, cupcakes, wafers, cookies, doughnuts, buns and rolls, filled with cream, custard, marzipan or jam.

At home, I usually have to settle for cinnamon rolls and maybe a cookie, but if I meet friends in a café on town, I’ll go for a piece of a Princess cake, or a Strawberry cake, a Napoleon pastry, or at least a Parisian waffle… or, oh Lord!, a “semla”, a.k.a. “fastlagsbulle” (Lent bun), a very light and fluffy wheat bun filled with soft marzipan and whipped cream… by tradition only available during Lent. Or, really, nowadays a few weeks before and after Lent. People actually start asking for “semla” in January…

If you’re Swedish, fika is friendly socializing over a cup of coffee and a cookie or two.

If you’re a foreigner, fika is just sweet pastry galore!

What does the word fika mean, really? It made its debut in Swedish language about 100 years ago. It was part of one or more secret languages used by tradesmen and craftsmen who wanted to be able to discuss things in front of their customers, without the customers’ knowing. It was important to protect trade secrets and craftmen skills, and new secret words for everything were invented in order to sound strange for the unknowing.

One of these secret languages was “månsing” (pronounced mawnsing), used by travelling salesmen from the vicinity of Borås, another was “knoparmoj” (pronounced knoupahr-moy), used by chimney sweepers in and around Stockholm. There were several other trade-specific languages, but these two have left a number of imprints in the Swedish language, among others the word fika, which seems to have been used in both.

(The method of creating new words using backslang has been used for different purposes in several other languages, e.g. in French, where it is used in the Verlan slang. The word “verlan” [pronounced vairlahng] is itself an example of this, being backslang for “l’envers” [pronounced lahngvair], which means “backwards”!. As seen by the spelling, backslang is a phenomenon that originates in spoken language, with a new spelling when written.)