Thomas · June 13, 2013
16 3 22k 7
Some of the links on this page are affiliate links. This means that Swedish Freak will earn a commission if you purchase anything from these links. Thank you for your support!

Ever travelled through the Swedish countryside? Or at least seen it on TV? Did you notice that the majority of all buildings – homes, barns, boathouses, every shed – are red?

Red cottages with white corners and other white trimmings are as iconic for Sweden as Dalecarlian horses, a Swedish signature mentioned in many songs: “den röda lilla stugan invid grinden” ( ~ the little red cottage by the wicket).

The history of the red paint goes back to approximately 850 AD. That’s when they started mining in Stora Kopparberget (= the Great Copper Mountain) in today’s city of Falun. Over time, the mine developed to a major industrial center, at times delivering two thirds of all copper used in Europe.

In 1347 AD, a Letter of Privileges was issued by king Magnus Eriksson for the foundation of Stora Kopparbergs Bergslag. Today, having extended its operations to several other industrial sectors under the name Stora Enso, this company is considered to be the oldest company in the world still in business.

The ore in Stora Kopparberget contains not only copper, but also sulfur, iron and several other minerals. The methods for extraction were rather primitive and very destructive to the environment. Visitors to the area described the place as a hell on earth, covered by thick black smoke, stinking of pungent sulfur. The air in the nearby city of Falun was so thick of soot and sulfur that people ran into each other, not being able to see more than a few feet. The mine itself was a narrow hole in the ground more than 1,000 ft deep, and there was no vegetation around it for several miles in any direction.

The great scientist Carl von Linné (a.k.a. Carolus Linnaeus) visited the mine in 1734 AD and described it with horror as the hell on earth. He climbed down in the hole on the sinuous and flaccid ladders to find ”twelve hundred black demons working in the caverns, surrounded by darkness, soot and smoke”. The workers died young, coughing, with noseblood, headache, and skin like leather. And the security arrangements were poor: many died in accidents in the darkness. One of the supervisors wrote ”Där går mången till arbetet frisk och röder, Men blir upwindad lytt, förlamad, lem-löös, döder” ( ~ “Many a man goes to work being healthy and red, But is hoisted up maimed, lame, limb-lose and dead.”

The tools used to quarry the rock and copper ore was sledgehammers, chisels and wrecking bars. But before the workers could use these tools, they had to make the rock crack, creating small fissures and become brittle: this was achieved by lighting a fire against the rock wall, keeping it burning for many hours, and finally pour cold water on the rock. This procedure smothered the clime with black sulfurous smoke and a haze of foul-smelling steam. And once the ore had been hoisted to the ground level, it had to be further roasted for several months (!) to get rid of the sulfur content, before it could be refined to copper. Huge amounts of wood was needed; it is estimated that in the middle of the 17th century, more than 3,000,000 cubic feet of wood was burned each year. In 1687 AD, the mine collapsed and created the giant hole that can be seen today.

The smoke from the open fires contained not only sulfur dioxide but also arsenic, lead, and mercury. The consequences were scary: all vegetation around Falun died, wildlife fleed and fish died. In short, Stora Kopparberget was a major ecological disaster. The mine was finally closed down in 1992, and since 2001 it has been defined as a UNESCO World Heritage Site.

Today, the mine is open for visitors with guided tours in the underground. (With greatly improved security.)

Now, what has this to do with falukorv and little red cottages? By the way, what is falukorv? Wikipedia defines it like this:

”Falukorv is a large Swedish sausage made of a grated mixture of pork and beef or veal with potato starch flour and mild spices. …
In the EU, restrictions apply to what may be labeled ‘Falukorv’ since 2001.”

In plain language, falukorv is one of the most common dishes found on Swedish tables; sliced and fried, baked with cheese and onions, grilled, chopped and mixed with fried potatoes and herbs,… The size of a typical falukorv is about 1 kg.

The mild flavor allows you to add any spice you like – it’s a versatile base for everyday’s dinner. Falukorv means “sausage from Falun” (sausage translates to “korv” in Swedish). But why is it named after Falun?

The ore quarried at Stora Kopparberget had to be hoisted 1,000 ft to reach ground level: this was accomplished by oxen walking in large treadmills. The oxen were of course exposed to the same hazardous smoke as the workers and had to be killed – i.e. slaughtered ­– ever so often. And the meat was used to make large sausages, that had to be “exported” to other parts of the country… the number of slaughtered oxen and the amounts of produced falukorv were bigger than what could be consumed in the vicinity.

And what about the little red cottages?

A second reason for the time-consuming roasting of the ore (besides getting rid of the sulfur) was to oxidize and thus get rid of the content of iron, which created a cinder of red iron ocher or hematite, called rödmull ( ~ red soil). This was regarded as garbage and was piled up beside the mine. A few hundred years ago, someone noticed that a wooden pole that had been sitting for years in the mound of rödmull showed no sign of rot or decay. This was the start for the production of Falu Röd (Falun’s Red), the paint that soon was on almost every house in the country, since it was cheap and could be mixed on site, boiling rödmull and linseed oil with rye flour and water. (However, since it was rather cheap, people of wealth preferred to paint their houses with more expensive white or yellow…)

The deep red color of Falu Röd is still popular in Sweden and Finland, also imitated in other kinds of modern paint, even if the original still has a large market share. But today you don’t mix it yourself – you buy it in large buckets like any other paint. And it is no longer cheap… 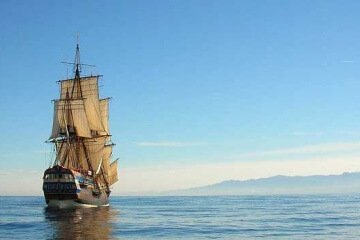 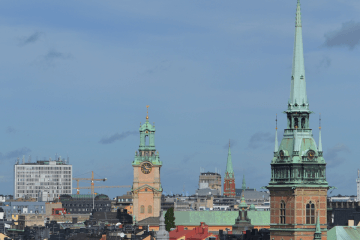 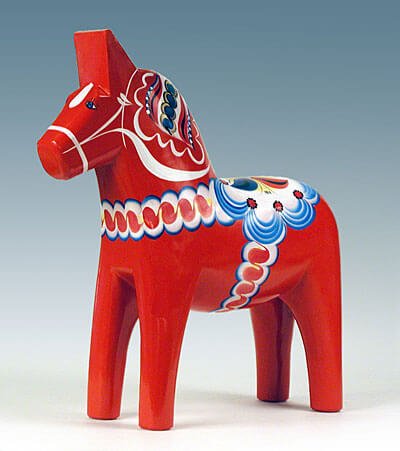