Did you know that Swedish Vikings actually were the founders of Russia, as described in manuscripts from the 12th century, found in Ukraine monasteries? The Vikings traveled up along the rivers that lead to the Baltic Sea, pulled their ships on land and continued along the great Russian rivers, down to the Caspian Sea and Black Sea.

The Viking age was a period of 400 years, 700 – 1100 AD, i.e. late Iron Age or early medieval time. At the beginning of this period it is not relevant to talk about Sweden, Norway and Denmark as countries or kingdoms, because they were – like most European countries – not yet created. The Scandinavian Peninsula was divided in a large number of smaller kingdoms or realms, each with its own local king/chief (some of these kingdoms correspond to today’s provinces). This was not unique to the Scandinavian Peninsula: the situation was similar in most of Europe. For example, in today’s Germany every major city was an independent state, and likewise in Italy. Thus, when I write “Swedish” below, I’m referring to people who lived in the area that is Sweden today.

Around 700 AD, the shipbuilders in Scandinavia had perfected the Viking ship: an open, rather long and narrow ship with shallow depth, which could be propelled with sails as well as with oars. A Viking ship is very strong and seaworthy. It isn’t stiff as ships usually are, when built on a rigid frame; it will wriggle and bend over big waves. It sounds scary, but Viking ships were safe and well suited for long journeys. Thus, given the means, the people in Scandinavia started to travel as merchants all over Europe and into Asia (and, in fact, all the way to America).

While Danish and Norwegian ships always sailed westwards, Swedish ships most often sailed to the east and south. The reason for this is easy to understand when you look at a map: only 25% of the Swedish coastline turns west to the North Sea, the remaining 75% turns east and south to the Baltic. But the Baltic Sea wasn’t the limit; the ships could sail up any shallow river, and they were so light and strong that they could be pulled many miles on land, over logs, to the next waterway, lake or river. Thus Swedish Vikings travelled not only in Germany and Poland, but also deep into Russia with its great rivers, all the way down to the Caspian Sea and the Black Sea, to Ukraine, Turkey and Greece.

However, it is documented that Swedish Vikings also participated in ravaging expeditions to England and France, but seemingly to a lesser extent.

There were three categories of Swedish Vikings (or travelers). Each of these groups had its own reason for traveling, the first not really what you think as Vikings:

The history doesn’t have much to say about the merchants, but we know they were trading iron and fur. Now, if you were traveling around Europe some 1,300 years ago, you would not go alone and unarmed: we can suppose that the Viking merchants were well armed and took their chances to plunder any village or town when there was an opportunity. The distinction between merchants and buccaneers may not have been absolutely clear.

The Varangians (väringarna), reached as far south as Constantinople (today’s Istanbul), where they were enlisted in the guard of the East Roman emperor. Proof is written in stone inside Hagia Sofia, where Vikings carved their names using the runic alphabet. Many stayed in Russia, where the Varangians are commemorated in names of many villages, towns and streets. (Hagia Sofia is the great basilica in Istanbul, later converted to a mosque, today a secularized landmark.)

The third and most known category of Vikings was the warriors, drifting around as robbers and pirates. They were often engaged in any of the numerous wars between the Nordic provinces and other provinces. Some of them followed the great river of Volga down to the Caspian Sea; others would sail down the river Dnepr to the Black Sea, which gives access to the Mediterranean.

Swedish Vikings were also settlers (the distinction between settlers and land robbers being very fine), known to have settled in today’s Russia and Ukraine in the 8th century, maybe even earlier. East of the Baltic regions, Vikings were known as “Rus” (see note below). Even if that part of history was banned during the Soviet era, it is a historical fact that Vikings created the first Russian states: the Novgorod Republic and the Kiev polity. The old manuscript, “Primary Chronicle of Rus” (a.k.a. “Nestors Chronicle”), written in Kiev about 1113 AD by the monk Nestor, as well as “The Chronicle of Novgorod 1016-1471”, both describe how the Rus people came from “over the sea” and created an early polity in Novgorod 859 AD under the leadership of a man named Rurik. After Rurik’s death 879 AD, his relative Oleg (Sw. Helge) was appointed custodian for Rurik’s son Igor (Sw. Ingvar). Oleg started an expansion southward to current Ukraine and ruled in Kiev until Prince Igor was grownup. Igor introduced the Orthodox Catholic Church as new religion in Russia and built many churches.

The names “Rus” and “Russia” as well as the Finnish word for Sweden and Swedish, “Ruotsi”, have the same origin. The part of Sweden closest to Finland isthe Roslagen archipelago, way back known as Roden (pronounced “rouden”). In the Iron Age, Swedish travelers across the Baltic Sea would have said they were coming from Roden, since Sweden didn’t exist at that time. Thus, the Finnish word for “Swedish” is “ruotsi”, (pronounced “routsie”), which further east became “Rus”.

The Vikings were infamous on the European continent for their cruelty: according to old English manuscripts, the Latin prayers in English and French churches used to begin “A furore Normannorum libera nos, Domine!” which means “From the fury of the Northmen release us, O Lord!”

I don’t know if it’s unfair to point out that Danish and Norwegian Vikings must have caused this reputation, since they always sailed westward while Swedish Vikings usually sailed eastward… On the other hand, we don’t know about the prayers east of the Baltic, since they didn’t leave any writings and there were no churches to pray in – it was actually Prince Igor, the Viking descendant, that took Christianity to Kiev and all Russia.

Another thing is the rumour of the Viking’s bad mood in the morning. The word “berserk“, spelled bärsärk in Swedish, is made up from two words: bär means wear, and särk is a shirt or nightgown, and the expression “gå bärsärk” describes the Vikings’ mood in the morning. The Vikings’ preferred beverage was mead, a sort of beer brewed on honey, and to improve the effect, the Vikings laced the mead by soaking fungi of the genus Amanita (i.e fly agaric) in the mead. The poison in fly agaric has an effect similar to LSD combined with alcohol, i.e. you get drunk and hallucinate. The side effect is that you’ll get a terrible hangover the morning after, with more hallucinations and mood swings. In that state, Vikings were known to go berserk and kill, moleste and destroy everything in their way, still wearing their nightgowns.

Now, don’t be afraid if you should meet a Swede in pajamas: we’ve ceased drinking laced mead and are really peaceful and friendly. And, by the way, don’t try this at home – the effects of fly agaric are quite unpredictable, the strength varies and the poison can be lethal.

The Vikings’ reputation is probably somewhat tainted by religious propaganda and by romantic novelists and artists:

– the tales of The Vikings’ cruelty and poor ethics are likely exaggerated, written by people who were propagating a different religion: Christianity

– the story that “going berserk” should refer to hangover after drinking laced mead has been around for a couple of centuries. However, in Norse mythology, “bärsärk” is a warrior with armored shirt who has sworn allegiance to Oden, thus becoming fierce and invincible

– it is probably true that soaking agarics in mead to improve the effect has been tried; given the arbitrary and dangerous effect, it was likely not very common

– Vikings didn’t wear helmets with horns; this rumour was “invented” by romantic artists in the 19th century, probably influenced by old Roman stories.

– most Swedes weren’t Vikings; they kept on with their daily peaceful lives, as farmers, hunters, fishermen and miners.

Note from Martin in Sweden: 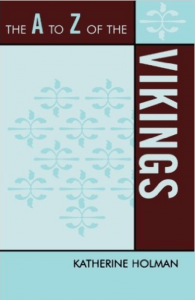 The same is the case with regard to Sigvurd Ring Radnversson (Ragnar’s father) (He was king of parts of present day Sweden and Denmark). Ragnar’s grandfather was king of Sweden. Again, the borders do not correspond to present day boarders. It has also been proposed that Ragnar Lodbrok is a name that mirrors/represent the deeds of several viking age individuals.

He recommends “The A to Z of the Vikings“, where he got this information. Also, looks pretty good if you want to know anything about Vikings!