SwedishFreak · March 2, 2011
9 0 1.2k 0
Some of the links on this page are affiliate links. This means that Swedish Freak will earn a commission if you purchase anything from these links. Thank you for your support! 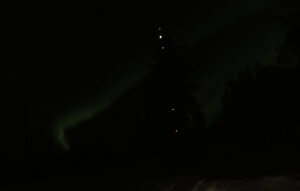 So last night I got a little more of a glimpse of the northern lights! This was my first time experiencing them ever!

At about 7:30pm I came out of an appointment. My Swede texted me saying his father saw some Northern lights not to far away. Even though I was in the city, I looked up… nothing, just pitch black 🙁 So maybe we weren’t supposed to get them in Skellefteå. 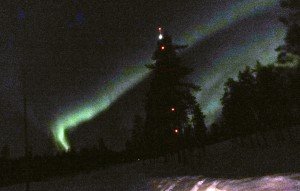 As we were driving to a friends house, I continued to look out the window up at the ski, even though there were lights everywhere. We had just stopped at a red light, with a green light not far away, and even more lights lit the area because it was a train crossing on the road. However, I spotted something in the ski… it looked like green smoke. With the houses all around us, I was sure my eyes were playing tricks on me- perhaps some chimney smoke was just reflecting off of the green traffic light… Was that really the Northern Lights? 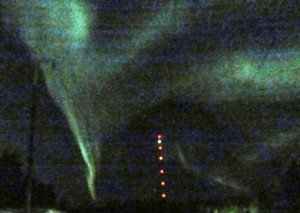 We drove out of that intersection and it became clear – it wasn’t green smoke, but the northern lights. THE NORTHERN LIGHTS! I started hitting my Swede in my excitement (not too hard mind you). We drove up to Vitberg, our local ski hill, to catch a better glimpse. They were amazing. Unfortunately our pictures do not due them justice. They moved very slowly about the ski, and would appear one place and then the next. And as soon as they came, the poof, disappeared again. Only leaving me to want more!

I was, however, happy! The cold winter had paid off, I saw the Northern lights!

Today fellow Swedish Freaks of Twitter also shared their experiences – and videos and pictures! Check out TheNorthlanders video of the Northern Lights below. 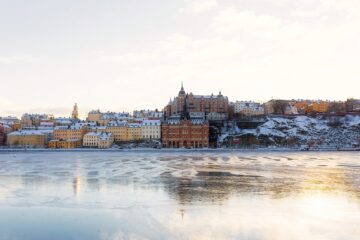 Six Wonderful Things to Do in Stockholm This Winter