As I predicted before the Swedish election, the political situation in the Swedish parliament has come to a standstill, waiting for a solution. Honestly, it wasn’t a difficult prediction: it was clear for everyone with a slight knowledge of Swedish election rules.

There are two candidates for the post of prime minister: on the left side, Stefan Löfven, chairman of the Social Democrats, and on the right side, Ulf Kristersson, chairman of the Moderates. The media refers to this as two opposing blocks. In the right block, four liberal or conservative parties make up “the Alliance” with formal mutual agreements, intending to form a government where they all take part. The left block consists of three parties, but having no mutual agreement, it isn’t really a block.

The parliament has 349 members; 144 members in the left block support Löfven, and 143 members in the Alliance support of Kristersson. I.e. neither one can – by themselves – obtain 175 votes, which is necessary to be certain to get the post of prime minister. Remaining votes belong to the joker, the “Sweden Democrats”, which in the last two elections has gone from almost nothing to 62 members.

The rules of the game

The Sweden Democrats are best described as alt-right or ultra-right. The most important thing in their agenda is to make Sweden more Swedish – that is, stop admitting non-white refugees and expel as many as possible with non-Swedish ancestry. Their leaders have repeatedly made statements of racism, antisemitism, homophobia, misogyny, and taken part in events where swastikas and other Nazi symbols were flashed. (One problem they must have – I think – is that they don’t consider the Sami people to be Swedish, but since the Sami have inhabited Sweden from the very beginning, it’s hard to find out where to they can be expelled…)

So far, Sweden Democrats have been isolated in the parliament, not invited to any deliberation or agreement. During the election campaigns, all the other parties have vowed not to allow Sweden Democrats any impact or leverage in their intended government. But of course, their 62 votes can determine any division, such as who will become prime minister. To make the situation more complicated, Sweden Democrats have declared that they won’t support any government that doesn’t promise to meet a number of their issues.

Since the two liberal parties (the Center Party and the Liberals) still strongly oppose any agreement with Sweden Democrats, it looks like the Alliance, with its mutual agreements, is about to break. This raises a new question: will the Center Party and the Liberals join the left block and support a left-wing government and maybe even become part of it? 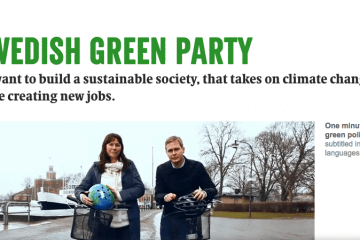