With half the of the year being winter (at least up here in Norrland), it is no wonder that winter sports are popular among Swedes. While the typical winter sports such as skiing and snowboarding are common, so are the not so normal (at least to us Americans) such as curling! Who knew 🙂 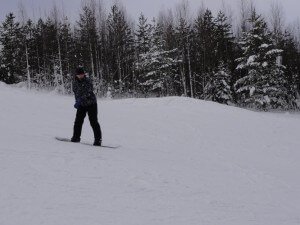 I come from California, so if there is snow, I say, let’s go snowboarding! However, here, you must keep in mind the temperature. When it -20C you do not want to be outside for long, let alone to fly down a hill. So while there are some nice days in the winter, skiing and snowboarding is much nicer during the spring.

That being said, it seems like everywhere I look there are ski slopes near by. I can see the local slope in Skellefteå from my work room window! There is also one in the small town of Norsjö where we have the cottage. I think there were mainly locals there, it only had 3 slopes, but hey, the smaller the slope the less people that are there! And if you had seen any of my blog posts about snowboarding, you will know I not very good. So you won’t find me looking being picky at all 🙂

My Swede confirms that this is common for most towns, especially in Norrland), to have some minor slopes.

I only started snowboarding recently – and I don’t remember ever being on skis. However cross country skiing is huge in Sweden. It is a great work out, you need to use almost all of your muscles. Most cities (including the town we live in, Skellefteå, and the suburb where my in-laws live have cross country tracks as well. These are all lit until about 10pm so one can easily plan to cross country ski after work when it is dark.

The great thing about these tracks is they are completely free. It is a great way to get a good work out in the middle of winter, though again, you still want it to be a little warmer than -20C. 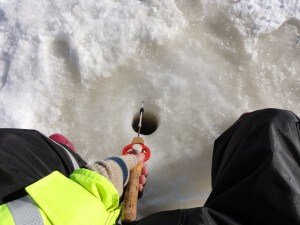 When it is cold and dark outside, what better time is it to go ice fishing! While most Swedes in Norrland go ice fishing during the spring, when it is warm and bearable, hard core fishers do it through out the winter. Want to argue that fishing is not a sport? I recommend sitting outside in -20C weather trying to catch fish and see how long you can stand it! For more about how awesome ice fishing is, check out my first experience ice fishing.

I don’t think you need a Swedish Freak to tell you that hockey is huge in Sweden! We live right across from the local hockey arena, and the only time there is any traffic in Skellefteå is when a hockey game finishes. Swedes follow local hockey, and of course national hockey is a big deal as well.

Hockey is also huge with children. Often I see children walking home with their hockey stick in tow. This, however, can be expensive for the parents with the equipment involved.

Did you notice this sport the last winter Olympics? I did, and maybe it stood out the most to me because both the men’s and women’s finals had the Swedish teams competing for the final!

Don’t ask me what this sport is about. Don’t expect me to tell you the rules or how it is played. All I know is that it involves giant pucks, a stick, some brooms, and lots of yelling. I’m not sure why it is popular here. I haven’t seen people play it, but it has been on TV now and again. Maybe it is just because there is so much ice around, they needed to make up another game to play on it. Who knows. If you ever live in Sweden, expect to come across curling!